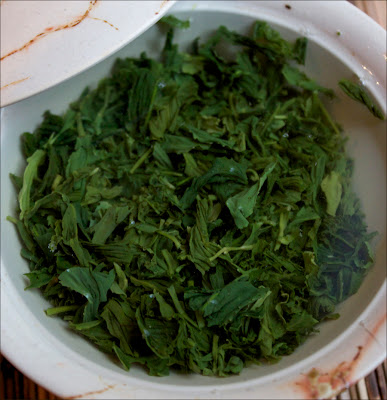 At our Japanese tea tasting over the weekend, we introduced something most people haven't heard too much about: aged Japanese gyokuro. Yes, a green tea that has been "aged" and it's not even Chinese. It's also not a new practice, Japanese connoisseurs and tea merchants often save their gyokuro harvest for up to a year before they will drink it. While we always look forward to drinking fresh gyokuro in the spring, we've been buying extra and storing some on the advice of Japanese tea friends. When properly stored, many green teas can last up to a year without dropping in quality and freshness but gyokuro is purposefully stored to improve the quality and the tasting experience. The tea is supposed to mellow and become even sweeter. The flavors are better balanced and even the texture is supposed to improve. We have a couple questions that we hope to answer with our own experiments: How long can gyokuro be stored and when does it peak? At what point in time does aging no longer improve the tea? Will the gyokuro eventually go stale like other green teas? What's the longest gyokuro has been successfully aged? 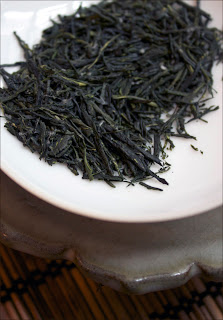 Our gyokuro (pine grade) comes from Uji in the Kyoto prefecture. It was harvested in the Spring of 2009 so we've had it for about a year and half. The broken leaves are rolled into little, slender stalks. The color is a rich, glossy green with bluish highlights. The aroma is soft with a hint of cocoa.
The most frequently asked questions at the tasting event centered around water temperatures and brewing times. We've addressed this a couple times on this blog but I'm happy to reiterate some basic points.Especially since I've been hearing about a popular tea guide on the internet that advises brewing green tea at 170 - 180 Fahrenheit for up to a minute... do not do this. 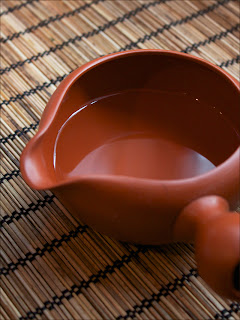 water cooler
Any guide that just has a general brewing temp. for all green tea, regardless of type is useless. Longjin, bilochun, sencha, gyokuro (to name a few) all have different requirements to achieve their distinctive flavors. For example: Chinese LongJin can handle a flash rinse at 185 Fahrenheit but then the water temperature is lowered dramatically (by about 30 degrees) for the actual infusion. Gyokuro, even one that's been aged like ours, requires very low temperature brewing from the start and doesn't get a rinse. If you brew a Japanese green tea at 180F, you are cooking the leaves. You might as well invite friends over for soup instead of tea. Also, the "tea guide" I was shown didn't even go into leaf and water ratios. I'm guessing the writer uses very little tea in a large amount of water and then a long steep time to pull out as much flavor as possible. Generalities like this just leads to mediocre tea, avoid them and take the time to practice and experiment for yourself. It's not hard to memorize the different requirements of tea; the knowledge will come naturally with experience. Okay, rant over; back to the tea. 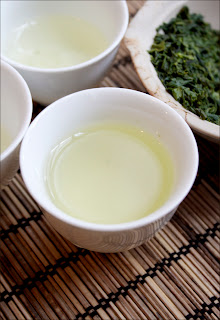 While the leaves become a bright, saturated green when they unfurl in the water, the tea itself is quite pale with a yellow-green hue. However, it holds a surprising amount of body with a soft, chocolaty finish. The first sip is a light touch and then the umami starts to blossom and triggers the regions of the mouth that produce saliva. The sweetness follows the savory elements. The idea is to sip and savor this tea slowly so that you can experience the subtle shifts in flavor. It's almost difficult to do because the tea is very smooth and travels easily down the throat. Minute leaf bits are suspended in the infusion like dust motes in air and add to the satiny texture. Not a trace of bitterness or astringent quality, it was also missing the grassy note of a fresh gyokuro. I ate some of the leaves themselves and they tasted pretty fresh.
Even though it's been below freezing in New York and Toki likes to keep the windows open, I haven't experienced the internal cooling sensation that usually accompanies green teas. So far, I haven't gotten the usual chills and I'm happy to discover a green tea I can drink in the dead of winter without any discomfort. I'm curious to do a side by side comparison tasting of this gyokuro and the next harvest in 2011.
Aged gyokuro... worth the wait so far. 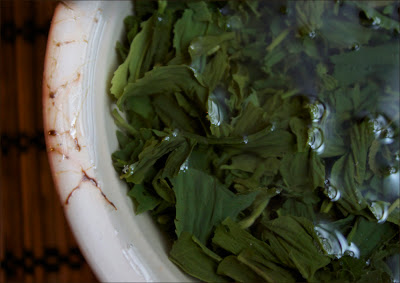 Sounds wonderful, I know I started digging into Gyokuro right as the first snow fell here in this part of the Midwest. Gyokuro has always been a bit of a challenge, but I've come to realize that when you get it right it is quite incredible.

My Gyokuro (a gift from Winnie) is soon entering its 3rd year. It is still very tasty.

I think later I may practice brewing it in a gaiwan to maximize the flavor.

Thanks for your comments guys!
Glad you liked it Adam.
I've gotten a lot better brewing gyokuro in a gaiwan although that first time was out of necessity and I made a mess!

Kudos to Yumcha and The Tea Gallery for much-needed comments on water temperature. It's been a running argument with many friends and dealers. My own view is that until proven otherwise, a delicate green from any source should not feel water hotter than is comfortable for the smallest finger, at least until three or four steeps have passed.

Do your experiments include any baking or roasting?

Kudos to Yumcha and The Tea Gallery for much-needed comments on water temperature. It's been a running argument with many friends and dealers. My own view is that until proven otherwise, a delicate green from any source should not feel water hotter than is comfortable for the smallest finger, at least until three or four steeps have passed.

Do your experiments include any baking or roasting?

Happy Holidays to you, Winnie, Michael, and Toki. One has been enjoying your recent posts.

Brandon is on it- you can get a lot more out of aged greens by brewing in a gaiwan. This is especially true as they become older.

Great post. I definitely agree with your analysis of brewing parameters for gyokuro.

How are you storing the dry leaf? As other teas? Sealed in a dark, cool, dry place? Or perhaps refrigerated?

Thanks DM,
I've also been in the same water temperature debates. It doesn't help that some of these people using really hot water on delicate green tea are "certified tea specialists" and spreading their misconceptions. Haven't done any experiments in roasting any Japanese teas. That may come in the future though :)

Matt,
Thank you for that bit of insight. As always, it so nice to hear from you.

Hi Tom,
Yes, the tea is stored in vacuum sealed bags away from light and heat. Cooler than room temperature is ideal.
I'm always concerned about refrigerating tea because a home fridge that is used to keep food fresh is too cold for most green teas. You can smell and taste that "refrigerator burn". This happened with some Japanese sencha I got from a "highly regarded" store in Manhattan that kept all their teas refrigerated. The tea was over chilled and that horrible flavor overwhelmed everything else.
If you have a small spirits cooler that you can dedicate to tea and/or sake with controlled temperature settings then that would be ideal.