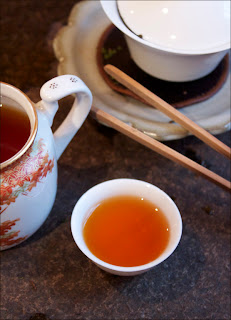 As we're hitting winter's stride in NY, I've been relying on more red (black) teas to get me through the biting cold and sunless mornings. I'm not a morning person and I choose the extra 15 minutes of sleep time over breakfast and tea before I leave home. Fortunately, I work in a tearoom and the promise of good, hot tea is what drags my bleary-eyed self in these days.This morning I made myself the Shizuoka Red, a red tea from Japan that we recently discovered. I love the floral and malty notes of this tea and there's something delicate about it's structure that separates it from the more traditionally robust red teas. The rich, coppery color of the brew gives me a cozy feeling and actually whets my appetite. 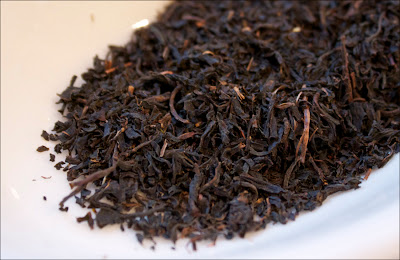 The broken, oxidized leaves of this tea resemble a Chinese red tea like Keemum. I could see bluish highlights on the mahogany covered leaves. I also spotted some very slender stems. Their lighter color made them easy to pick out against the dark leaf.

Native red teas are somewhat rare in modern day Japan. I heard they were more prevalent during less abundant times as it was easier to store and save than the more fragile green teas. Nowadays, the most common red teas on the Japanese market are from other parts of the world. We had sampled a few red teas in the past but they were pale imitations of richer, fruitier Chinese reds. Our opinion changed when we first tried the Shizuoke Red. Beautifully balanced with a natural sweetness, it stood up to our scrutiny and we discovered something novel yet pleasantly familiar at the same time.
I used 4 grams in the medium gaiwan (90cc). A teapot with a built in strainer would be fine too. In fact, because the leaves are so broken up, a gaiwan isn't the best brewing vessel. It's easier for the broken bits to slip out and a strainer would be helpful. I was careful about how big I made the opening between the lid and bowl when I poured out the tea and used a separate strainer to catch escaping leaf bits.
Since this is a Japanese tea, I decided not rinse the leaf and steeped the first infusion for 10 seconds. Toki was also in the office so I decanted the tea into a pitcher and served him a cup. The taste reminded him of a Darjeeling or Oriental Beauty. There is a familiar sweetness with a touch of malt and honey that we also find in those teas. I found more fruit than flowers in my cup. If I could describe a tea's "personality", I'd say it had a sunny nature. The body was smooth and slender, no trace of tannins. I let the second steep sit a bit longer, about 30 seconds. The color and flavor deepened with more malt and maintained it's smoothness. Even with the 3rd steep, there wasn't the usual tannic quality and astringency that comes with red teas. The taste softened dramatically after the fourth steep and like other Japanese teas, didn't carry much stamina for more than 4 cups. I'm still drinking this tea more than any other red tea this season, partly because I feel it warrants more experimentation with brewing times and leaf to water ratios. If anyone else is drinking this tea, I would love to hear how they are doing it. With it's refined sweetness, the addition of sugar or milk would overwhelm this tea's nature. 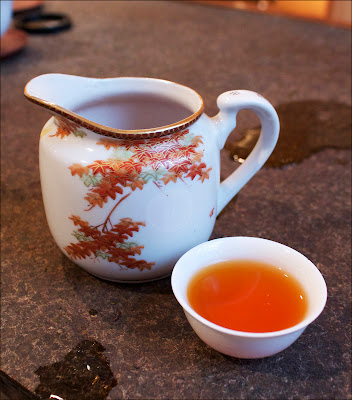 Fall is my favorite time of year and these past couple months I've been using a vintage cream pitcher from Japan because of its red maple motif. The matching colors and elegant styling is perfect for serving the Shizuoka Red. While I love traditional fairness pitchers, a small, antique creamer does the same job and adds something unique to your tea table. Also, this piece had been separated from the rest of the set long ago so it only cost me $15.00 at the flea market. Old, pretty and very affordable... my favorite combination.

Shizuoka Red and a vintage creamer... a nice way to add some refinement to a casual morning at the office. 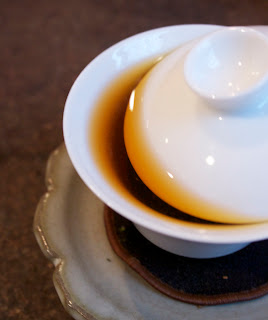