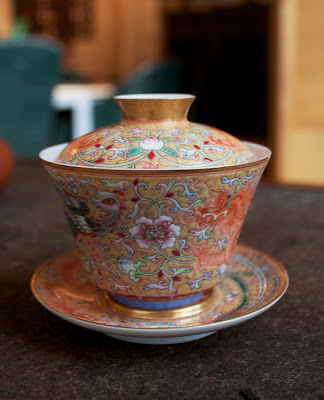 I finally brought my dragon & phoenix gaiwan to the Tearoom for show & tell. This was the super ornate, hand painted one I found at a Hong Kong teashop; balked at the price; went home to New York without; then had reverse buyer's remorse and made Michael order it for me. It's been languishing in the back of my tea cabinet while we focused on setting up the new tearoom. I was happy to rediscover this lovely piece last week: 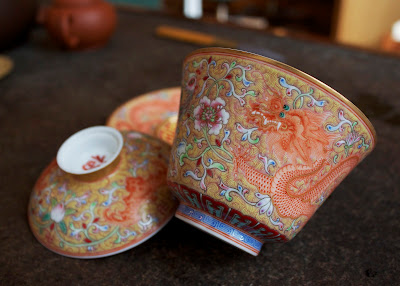 I love the lush details of the dragon with the gold outline of it's jaws, clean white fangs and every scale was added by hand. Even the background hasn't been spared as a closer look shows a tight random pattern surrounding the mythical beasts and flowers. It's richly colored and psychedelic yet also elegant.
When I received the gaiwan, Winnie also handed me this: 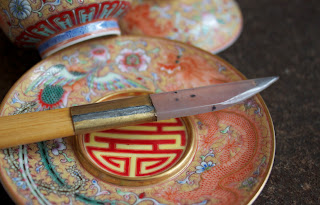 At first I thought it was very flimsy puer knife. Turns out, all the gold trim on the lid, cup and saucer was painted and left matte. The "knife" is used like a scraper to bring out the traditional shine of the gold. The blade is agate and polishes up the gold paint. I had not counted on that and Winnie just gave a shrug and said "That's how it's done, get scraping." Seriously, she seemed more surprised that I didn't know this fact about new gaiwans. I also realized just how much gold was incorporated into the artwork, like the thin line that traces the dragon's spine or the flecks in the Phoenix feathers. Michael was entertained by my frustration and said with an evil grin, "Imagine how much more this would have cost you if the artists had to do this part. It's going to take you hours but you'll save money." Several "Dexter" episodes later and aching fingers, I managed to give the gold details a soft, buttery glow. 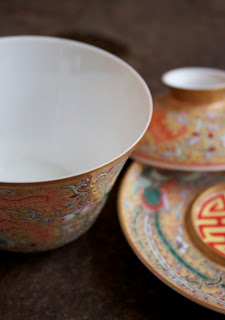 I am a little scared of using this gaiwan. It's even thinner than the ones we sell at The Tea Gallery and there is only the slightest flare along the rim. There's more risk of chipping or just outright dropping it while I'm decanting tea. I do intend to use it but I'm also happy enough to just see it displayed. 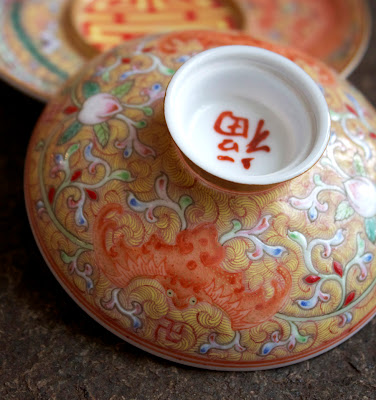 That is pretty gorgeous. If you are scared to use it for tea you could always use it as an ink well for calligraphy.

Thanks for the suggestion:)
I'm building up my courage to brew with it. The plus side to my nervousness: handling something as fragile as this makes me slow down and I get a hyper awareness that forces me to be careful. Usually makes a better cup of tea this way.

Beautiful gaiwan, and what a gift, that your work enhances the richness of the craftsmanship and your love for it as well. Thank you so much for adding this post to an always enjoyable blog!

Hi Rebekah,
Thank you so much for your kind words!

It hurts my eyes trying to read such small texts on this page...ouch!

Sorry, I didn't realize people had trouble reading the text. Will try to make it bigger from now on.