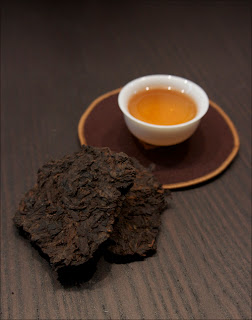 Last Sunday, Brandon from Wrongfu Cha was in town and the two of us paid a long overdue visit to our friend Kingston. For the past couple years he's been energetically building his teapot museum and tearoom in the wilds of Brooklyn. Since my last visit, he's been tirelessly growing his collection of yixing antiquities and remodeling his space. There's even an official name and banner that greets you at the front entrance: Orchid Tea House.  While his tearoom is still a work in progress, close friends and fellow antique collectors drop in to have tea and admire his latest acquisitions.
We spent the entire day with Kingston, enjoying his hospitality and expressing unabashed envy at many of his pieces. The one that really took my breath away deserves a post all it's own: 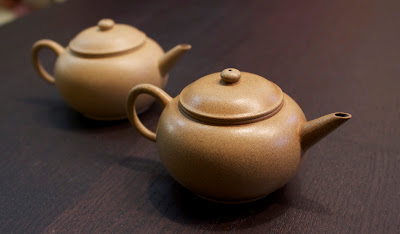 Two Ching Dynasty teapots made with duan-ni (yellow) clay. These elegant shuiping were export Yixing pots for the royal Siam collection during the reign of King Rama V (his full name:Phra Bat Somdet Phra Poramintharamaha Chulalongkorn Phra Chunla Chom Klao Chao Yu Hua).
Whats even more astonishing is that the pair was acquired separately by Kingston. Thanks to a combination of savvy, luck and friendly tea connections. While they look nearly identical, there are small differences due to the handmade quality. There is also a difference in hue. One has been used to make tea for some time and the other was left pristine. The tea stained pot had a deeper glow and the edges stood out where the tea collected and darkened. It also felt smoother than the untouched pot. The sandy texture of the duan-ni clay was softened by the tea oils and there was a comparable difference between the two. 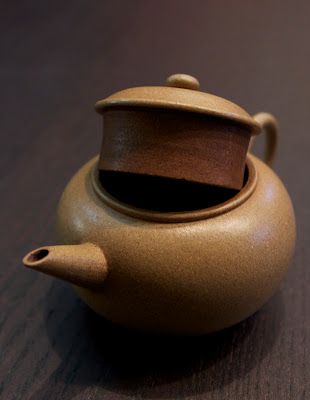 The tall flange was eggshell thin and that both lids escaped chipping was a miracle.Both pots were lightweight and fit snugly in my hand. 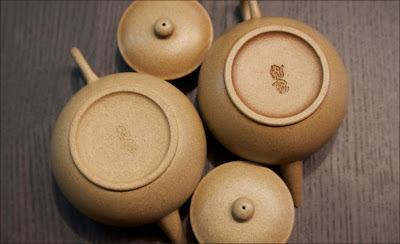 The royal Thai stamp was on both teapots but most visible on the tea stained bottom. There was also a smaller stamp on the inside of the lid.
The craftmanship is exquisite, the sharply defined spout is balanced by a slender ear. There was barely any space between the rim and the teapot's opening. To own even one of these spare and sophisticated teapots is impressive but two is incredible. 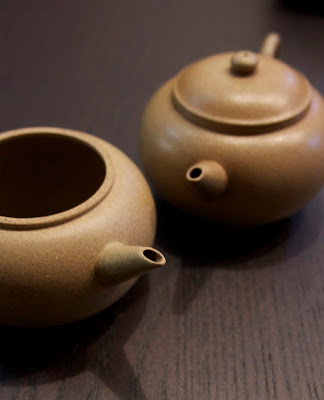 Beautiful! Always interesting to see the variety and workmanship in vintage Yixing pieces.

Thank you for the comment. I'll pass it along to Kingston :)

Those are amazing. I love the yellow clay. Thanks for sharing.

Thanks for introducing me to a tea room, so nearby!

Thanks Matt. I love duan-ni too, even though it's more difficult for me to pair with tea than other yixing colors.

Hi Notesontea?
Are you in Brooklyn then? Kingston's isn't open yet but I'll be sure to announce when his place is ready for business