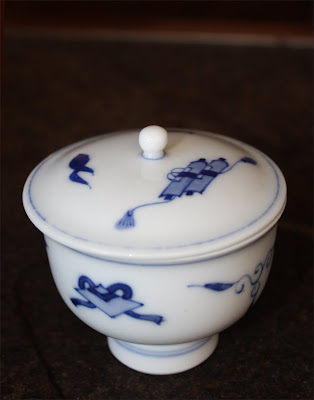 I think the porcelain gods were with me last weekend. While poking around one of those "stuffed to rafters" vintage shops in upstate NY, this relatively pristine tea set was found in the back next to some Bakelite bracelets and a couple of tarnished tins. For an astonishingly small sum (I tried to hide my giddiness in front of the proprietor) I was able to take a little bit of history home. 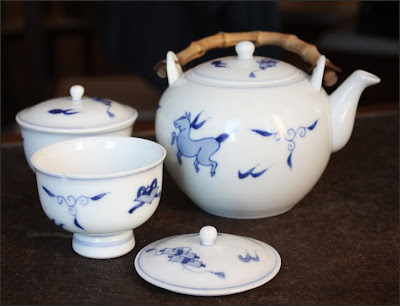 I don't have Michael's eye when it comes to dating old teaware but I had no problem figuring out the age when I turned the pieces over: 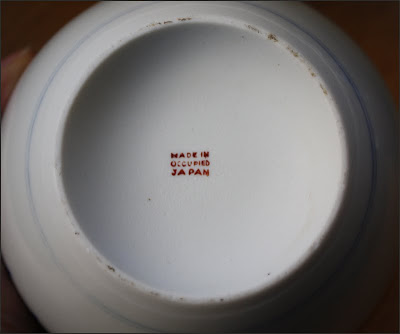 While a "Made in OCCUPIED Japan" stamp is pretty obnoxious reminder of a terrible time with bad memories for many, it's useful as a "time stamp" that tells me the items were made between 1945 - 1952. Right after WWII, during the several years Japan was under US control.

Made for export, the tea set seems to be going through a little identity crisis. The teapot's round shape and spout has a Western feel but then it's paired with the traditional bamboo handle. I find it beautiful, right down to it's rusted metal hooks. 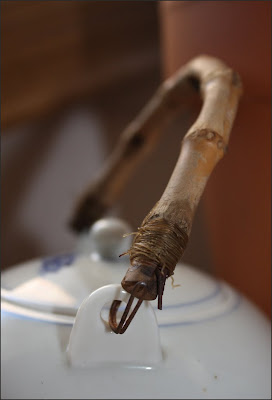 It's well made with nice thin walls, there's even a built in strainer for the loose tea leaves. 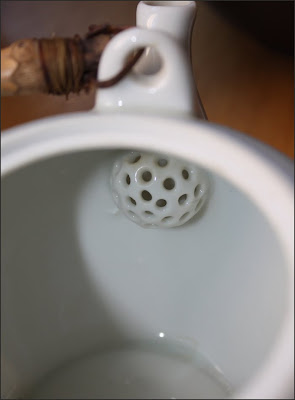 I was more attracted to the covered cups than the teapot. There were only two that were found but the set may have originally come with more. Still, I was pretty pleased to find both with their lids and only some minor damage to the rims. 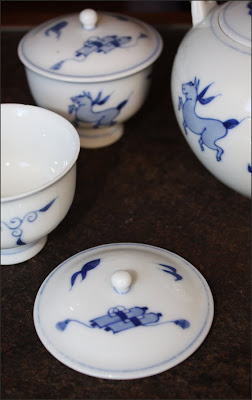 The artwork is simple on both cups and teapot. The painting of the horse is a little on the cartoonish side but I find a childish grace to the effort. The lids on the cups is slightly larger than the one for the teapot. The cup itself has a nice flare to the rim and it rests perfectly against my bottom lip. The striped foot adds elegance to the wide body and from above the teacup seems to float above the table. 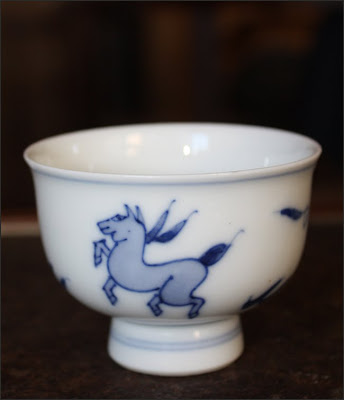 I hope this has encouraged you to go and look for your own lucky finds. Maybe we'll cross paths at the next flea market...
Posted by yumcha at 2:22 PM

When I was in California (we got back a few weeks ago) I found a set of 10 lovely green cups that I grabbed up at a consignment store. Just what I needed - more cups. (That's a joke, but I miraculously found room left in my cabinet.) But they're perfect: kind of an apple green color, with raised design that sort of similate leaves I think and what's left of a very thin gilded edge. Perfect size for drinking; white inside.

Sounds like you had fun upstate... any hints where this was for those who'd like to go hunting too?

Hope you, Michael & Winnie & family are all well...
yours
Janine

Hi Janine,
So good to hear from you. Your cups sound lovely.
One very popular antiques destination is Cold Spring. The main street is full of antique stores and it's close enough to NYC for a nice day trip. I've found a couple of fun things including this set while I've been up there.

Thanks, Dae. I love hunting for treasures, although my knowledge is extremely limited so that I just have to go by my own taste and intuition (hey at least I like what I buy). Too bad we can't all just take Michael (or Toki) with us!
yours again,
Janine

I want to say that this is practically the best gaiwan I've seen a blogger display as a find. And I follow over 200 tea blogs right now. That's because the horse is so cool. Maybe I just like the bridge between East and West. But that's a real treasure of an important time in history.

Hi Jason,
Wow, over 200 tea blogs?! I'm honored that you read my little posts.
I'm glad you liked my find. Considering how little I paid for it, it does feel like I discovered a treasure. A couple of friends have really enjoyed drinking out of the cups when they come over.

The horse picture denotes my favorite, Puerh, with its Tea Horse Road history. That's what I see in it.