A season of Aloeswood 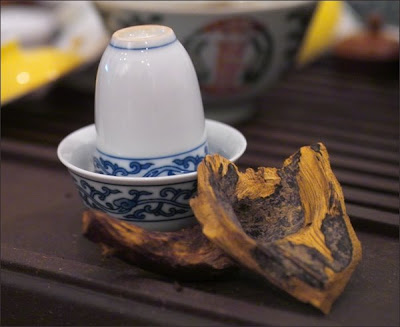 Tea isn't the only thing Michael's been brewing these past few months. He partnered with Toki of The Mandarin's Tea Room in a little side project. Lately their interest had been in the rare and rarified Aloeswood. The resinous heart of an evergreen tree that's found in parts of Southeast Asia and cherished for it's intense fragrance. One that conjures up exotic forests, spice markets and perfume soaked nights. What makes aloeswood different from other naturally scented woods? The tree must first become infected with a fungal parasite, then it exudes a dark resin as part of it's defense against the fungus. This rare but natural process has to occur for the tree to become the fragrant Aloeswood.
But why were we brewing it at The Tea Gallery?
Most often used in incense and perfume, Toki thought the wood's fragrance might enhance a basket of liubao tea if stored and aged together. Winnie noted a flavor and scent in certain aged teas that reminded her of Aloeswood. The more it was discussed, the more associations between tea and tree were discovered. Also, making a tisane of Aloeswood wasn't uncommon. We just had to try it oursleves. 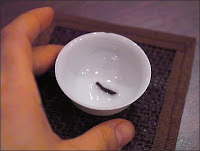 This tiny splinter of Aloeswood was all that was needed to fill four gongfu cups with the most incredibly scented water. There were layers of fragrant wood and warm spices wrapped in sweetness. I was reminded at once of sandalwood, cedar, cinnamon, clove, ginger, allspice and none of the above. There was something familiar and yet an alien profile was now altering my tastebuds and pulling up random recollections in an effort to fit itself into my sensory banks.
While Michael steeped the precious splinter many times that afternoon, the fragrance did not dampen. It was obvious we would have to stop before the Aloeswood did. When I asked Toki if this was normal, he replied, "Not all Aloeswoods are equal." Many believe that the best specimens were harvested to extinction decades ago. The wood that may have scented the perfume or incense of a Ching Dynasty aristocrat may have been far more powerful than the modern grades available now. Many trees are deliberately infected to meet the demand but these are considered an inferior grade to the wild Aloeswood. You can find Aloeswood to brew but the strength and complexity will be determined by the grade and age.
While the alluring perfume danced on our palates, Michael decided to give our other senses something to indulge in. 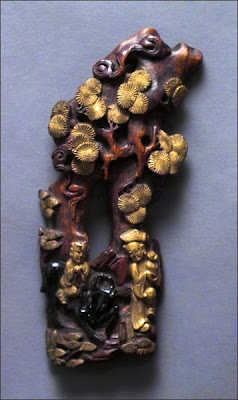 An Aloeswood carving of a boy sitting atop a bull and his companion on foot.
About 6 inches tall and possibly early Ching Dynasty. I'm always impressed when Michael produces the appropriate antique for a tea gathering; it's like bringing the perfect dessert to a party only much cooler.
Amazingly, there was still a fragrance but one that had mingled with dusty storage rooms. 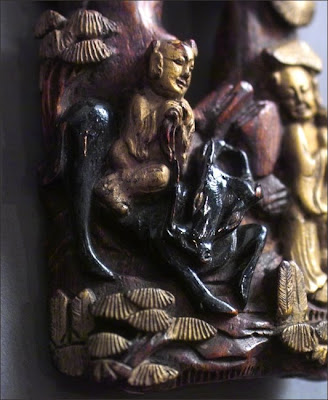 Although the figures lack finesse, there's a beautiful rythm and fluid movement to the overall piece. The gold accents glow softly against the dark wood. Expressive poses and swirling branches brings this carving life. 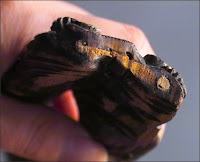 At the foot of the carving are two wooden peg inserts. This was once attached to something much larger and we can only guess at what it was. Part of a greater artwork or something more utilitarian? If so, was the rest of the piece also made from the precious Aloeswood? Having been passed through several owners before it reached Michael, it's history has been pretty much lost to us.
I asked Michael the age of the carving and he would only say a few hundred years, give or take. When I pestered him for more information, he pointed to the shelves of antique catalogues and books and wished me luck on my research. I'm still searching...

Sometimes it's the other things you learn that bring you back to tea.
Months later we are still sipping water steeped with a little splinter. 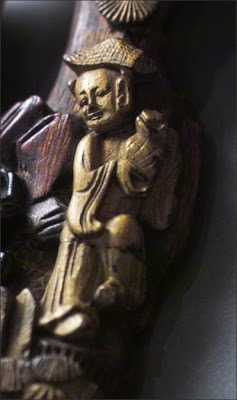 Great interest! Great post! Just to point out, the white/pale gold area of the Qing crafting is the resin from a highest grade of Aloeswood. Hope one day we can taste that white spot : P
Cheers, T

wonderful! i like the way u sipping aloeswood tea, infact im doing the same here. what a wonderful feeling to find someone doing the same as im. if u wish to know more about aloeswood pls go to opensesame38.blogspot.com i got source of aloeswood that u can ever find.